My IRL group that meets on Tuesday nights just started a dungeon delving game using GURPS run by one of the players who was in my Monster Hunters game. We had our second session tonight.

Point total for characters is 150-50-5, and since the entire group decided to play monsters/monstrous beings... character creation got a bit nasty.

Cinder (me): Some kind of fire elemental offspring. Innate burning attacks, not much else.
Rocky: IQ 8 Golem with decent DR 4, Injury Tolerance: Homogeneous, and not much else
Beholder: Has a bunch of hilariously weak eye beams (binding, corrosive/burning innate attacks, telekinesis, etc)
Dr. Dinosaur: Makes things explode and is a dinosaur. Played by my roommate's ten year old daughter.
Homunculus: Winged greedy thing whose capabilities I don't know much about yet.

We started play in the middle of nowhere in a small hamlet inhabited by some goat people who were extremely unhelpful at giving us any sort of directions or material aid. We briefly considered cooking and eating some of the goat people because supplies were low, but decided to try exploring instead.

We trudged around some forests for a while, eventually getting into a fight with a giant spider who managed to bite the golem and then get roasted by me and the dinosaur. Turns out three PCs have burning-related innate attacks, meaning significant overlap in combat ability which means niche protection is laughable.

We somehow managed to make enough naturalist skill checks to not starve despite nobody having more than a 9 in it.

Eventually, after repeated failed navigation rolls, we found a place that might be the dungeon entrance we were looking for. Heavily guarded though, we went around and searched up some rumors from another hamlet and tried another location.

This other location was behind multiple wooden palisades and walls, which we started to burn down at range with a constant barrage of fire attacks and explosions. We ended the first session here.

We more or less immediately started in combat with the things guarding the hole that we believe leads to the dungeon. Homunculus tried flying over to scout, took a crossbow bolt to the torso for 5imp and was immediately out of the rest of the session because nobody in our group has any healing capability.

We spent some time searching the surrounding area and found a destitute farmhouse that still had a door. We stole the door and used it as mobile cover to approach the walls and palisades, eventually cooking most of the Kobolds.

I largely relied on my 1d 15ROF 7 acc innate attack because the range penalty was -7 for the first half of the fight as we picked people off at range. It was a ho-hum "Aim shoot, aim shoot, I aim and shoot again" situation.

We left off with 4-5 Kobolds still alive, with us holding a gap in their defenses with the door and us clustered behind it.

I definitely feel this campaign needed 250 points to really be enjoyable for me as a player, especially once everyone decided that a monsters game would be more fun than playing vanilla humans. Everyone in the group dumped points into fun abilities- flight, innate attacks, being made of rocks- and skimped heavily on skills. I haven't looked at everyone's sheets, but between the three I've seen the IQ skills for things like naturalist, navigation, and cartography are either non-existent or one point wonders.

My character is the only one with first aid, at a 10 with 1 point spent.

Now, there's a balance in any campaign between the premise, what the GM expects to present as challenges for the players, and how the players build their characters to face challenges. Obviously, a mix of things that PCs are prepared for and not prepared for is best, because it allows someone with niche abilities to shine, but everyone in the group is obviously geared for munchkin played out with GURPS:


"I KICK DOWN THE DOOR, KILL WHAT'S BEHIND IT AND TAKE THE LOOT."


Our group is not geared for trying to locate the dungeon everybody wanted to start in to begin with. Now granted, I could have skimped any number of abilities to shore up my skills, but that directly cuts out from my fun burning monsters to ashes. My first five earned characters points went into Explorer Talent because I expect the GM to continue being a twat about needing those skills (Cartography, chiefly) even though I'd rather be adding additional dice to my innate attacks, picking up more utility (obscure, infravision, etc), or adding to skills that are more fun to use.

It feels like we're being set up to fail. It doesn't help that the GM created PCs (Rocky and Dr. Dinosaur) are nigh useless. Rocky has DR 4, IT: Homogeneous- and ST 10 or 11. And no other useful skills except maybe geology or brawling, both of which are probably around 12 or 13. Sure, rocky can stand around and soak damage, but that's nowhere near fulfilling the brick role the player wanted (HULK SMASH).

Dr. Dinosaur has magery, no spells, and an explosion innate attack that requires FP- despite it being their core combat option. Because casting magic missile five times and being out of spells for the rest of the fight was fun back during 2ed D&D, right?

Let's not forget that any failure at this point inevitably leads to some kind of slow grind to a painful death. No healing, no town to go back to for resources/rest up. No social connections or friends to go to for help. It feels a little like walking through a minefield. I'm dubious about how long this continues before frustration hits the boiling point and we abort the game.

Here's my character (I did not bother to change the randomly generated biographical info): 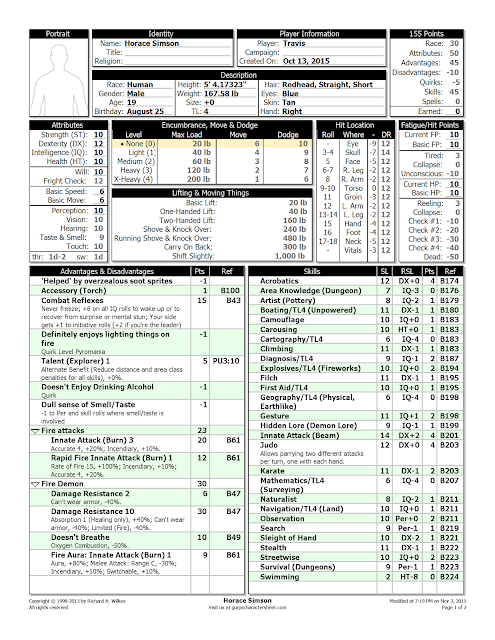 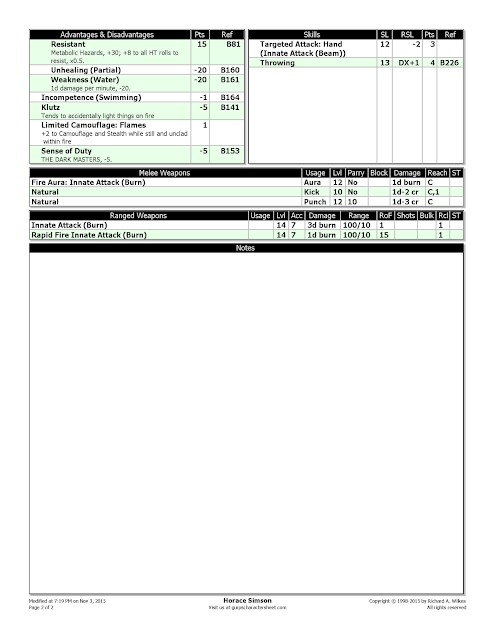