My First Impressions of the MapForge Beta

A while back, some GURPS bloggers were pushing the MapForge Kickstarter, and since I've recently gotten the itch to make a Megadungeon (better use that inspiration while it's still hot), I figured I should get a beta copy and try it out.

I mean, I paid for it. Shouldn't investigate other options before checking out the product I backed, right?

Despite a post opining the lack of people requesting beta keys and putting out a call for testers, I had a rocky go of getting access.


This wasn't limited to just me, either.
I can actually address why people are having so much difficulty:
1: To avoid getting 20,000+ emails all at once asking for keys, the creator broke them into five waves without giving people an easy way to check for which wave they are a part of
2: Most people don't feverishly check Kickstarter every day for updates- I only seriously check Kickstarter once every couple of months, and all five updates had blown well past in the time frame between paying actual attention to kickstarter
3: Way too much fucking reading to do before getting to the relevant info (marked in red below)
4: I never received an actual email from Kickstarter going "MapForge wants you to try out the thingy" 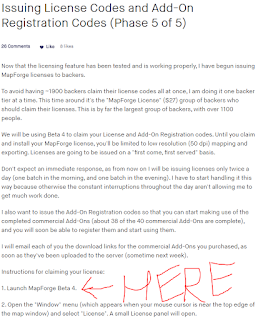 Plus when your Beta access process is to download the beta program from your website, email you a computer-specific code, and then wait for a response, most people would consider that convoluted. Obviously you're not running some kind of centralized licensing server that the program phones home to to check that everything is hunky dory, because this is twig and spit level setup going on.

How does it actually run?

So, I get the program, I get the key, I have to manually type the key (despite being told in the email that typing it is inaccurate and I should copy and paste) because copying and pasting didn't work 3 times and forced me to restart the program to actually enter the key (who the fuck is going to brute force a license key when some script kiddie is just going to develop a crack anyways, are you fucking kidding me?).

So I fire it up ...and find it has no tiles. Because despite all Kickstarter Backers getting some free assets to play around with, they're not bundled in the fucking install. Adding them is admittedly easy, but why the fuck should I have to dig through Kickstarter posts to find free stretch goals?

So I sort that out- and BAM, memory errors.

Evidently there's a specific exe required to run it on Windows 10 x64 machines (only one of the most FUCKING COMMON OPERATING SETUPS CURRENTLY IN THE WILD).

And this was with ONE ASSET PACK, NOT EVEN THE FULL TEN.

So, I grab the right exe and fire it up. It works. Works in that navigating the various tiles and items is deathly slow. There are frequent hangs of 10-45 seconds, windows throws up "not responding" fairly often, sometimes alternating with hangs, and has a habit of starting up as a half-loaded zombie if you focus on another window (like, this pithy blog post you're currently reading) while it's in the process of opening.

It not quite as bad at eating up RAM as Chrome, but it's pretty RAM hungry.

Performance seems to be directly linked to the size of resources available to actually map with. Official recommendation is to disable content you don't plan on using, which really sucks given than changing said content requires a restart. Sucks to be you if you want to browse through a gigantic library of assets to mix-and-match what's best for whatever fucked up game you want to run.

My Specs, for those wondering:

I'm running a GTX-1080 for my video card, and I really should double my RAM, I'm aware.

Posted by Mr. Insidious at 1:56 PM No comments: