I rolled an 18 for Bartley's reaction to Vinnie, allowing Vinnie to take him as an ally. Bartley is built on 50% of Vinnie's current point total (rounded up slightly).

Bartley's physically fairly strong, above average intelligence, is lucky and can slog through a hit in a fight. As far as skills go, he's a scrapper, having boxing and wrestling at decent levels, with a spattering of various skills he picked up during a year or so in college. 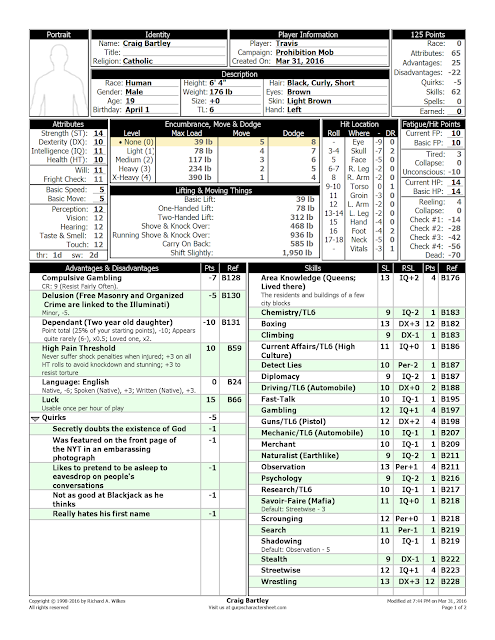 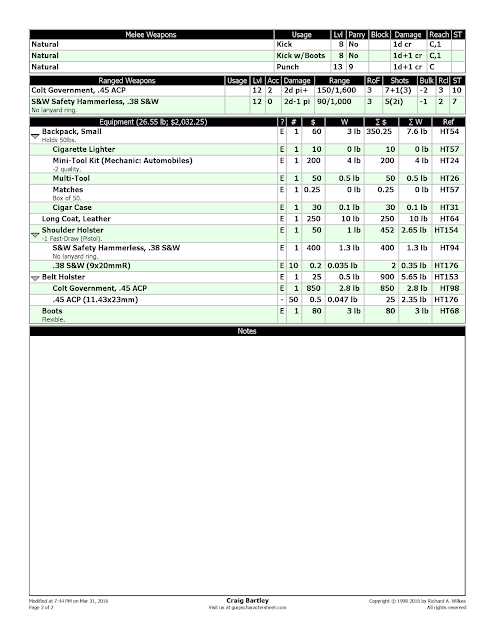 Starting a new Biweekly game, Looking for one More Player

I've known some kids for at least 6-7 years now, and they're getting up into the 15-16 range, so I figure it's time to give running a game for them a shot.

Hence the mapping, hence learning how to operate roll20 at a basic level (although I see no reason to macro everything up), and working through Action 4: Specialists with them to make characters.

They'll all be playing 200 point Special Forces operators, although I'm not telling any of them mission parameters or background except for the fact that they're all in the same unit and know one another. There is a plot reason for this. Expect a cold open.

The game should be fairly linear, this will not be the sandbox that Prohibiton Mob is.

I've roped one of my prohibition mob players (the one who plays Red) into playing the squad leader, hoping that experienced players at the table will be a calming influence on the teenagers, some who are entirely fresh to tabletop roleplaying entirely.

There are currently two PC's entirely stated up (by two of the three teens).

Play will likely be on Friday or Saturday (leaning Friday) every other week, starting ~6PM EST. Play will be on Roll20.

Anyone interested in joining should either comment on this post or send me an email at vi lobion at g mai l. com (screw you scraping algorithms).
Posted by Mr. Insidious at 7:40 PM 1 comment:

Email ThisBlogThis!Share to TwitterShare to FacebookShare to Pinterest
Labels: GURPS

A possible solution to my mapping woes?

I generally HATE mapping. I'm not particularly good at it, I have no artistic talent, it's time consuming, and most locales my players visit are one-and-done kind of situations, so I feel the effort is wasted in a lot of situations.

My players have suffered over the years through shitty MS Paint drawings, a few maps made using various online tools/tilesets (Tiamat before they disappeared), and frequently with none at all, forsaking tactical play altogether (A17, Monster Hunters in 1640's Ireland, and Prohibition Mob).


Today I realized however, that I've already spent 93 hours playing a game that allows for exactly the sort of mapping that is extremely useful for a modern setting- Prison Architect. Now, I picked up Prison Architect because I needed something fairly light and time consuming that my laptop can handle while I travel up to Maine every couple of months- when I'm not mourning the death of my pet in Nethack.

Here's an initial attempt at an area my next campaign might feature (this is not for Prohibition Mob):

Compared to my MS paint creations:

Prison Architect should work out well  for inside, modern areas, especially things like offices, prisons (surprise!), hospitals, and even residential areas. I wouldn't want to try to make a ship with it, and outside areas might be harder to do, but not impossible.

I see a few big weaknesses with this approach:

So Christopher Rice and Douglas Cole both posted about Danger Sense. They point out that it's passive, easily forgotten about, or becomes stifling for the GM to work around (which is the same reason Mind Reading is banned in all of my games).

But I'm not a big fan of a danger sense point system similar to luck, serendipity, and all of the other metagamey stuff you can by to help plot protect your characters.

No, I think you need to think more intuitively.

Intuition allows a player to make an educated guess/hunch on a topic that doesn't build off of existing knowledge. The GM makes a secret IQ roll with a modifier equal to the number of "good" choices minus the number of "bad" choices. For example, if the PC is wondering which car in a parking lot full of seven cars is the one stashed with drugs, it would be a -6 to the check (1 right car, 6 wrong choices, 7 total).

Danger Sense can be much the same, where players have to actively decide to use the ability. Sure, this weakens the ability to an extent as a means of protecting a character played by a players who might not be very cautious, but Danger Sense also doesn't inherit penalties to perception rolls like Intuition does with IQ rolls. A character with high perception will reliably be able to tell that something is just... off. Any other character wouldn't even have the option of trying such a thing without having a relevant skill, much like characters can't attempt intuition without the advantage itself.

Now, for limiting Danger Sense, I have two main suggestions:

Posted by Mr. Insidious at 5:59 AM No comments:

With Moran dead, and with a points budget that won't allow him to buy off the enemy immediately, Sam needs a new nemesis. I'm still working out some of the details, but here's what I've got thus far.

To my Prohibition Mob Players:

I recently did a post on defeating doors, and I gave keypads and other electronic mechanisms only passing mention.

I stumbled on a Vimeo channel that really shows how a character such as Tobias (yes, all the character sheet images are gone, it's a post from almost two years ago) could believably beat any number of security devices given access, time, and the correct information.

Safe Cracking (Vimeo videos can't be embedded on blogger evidently, since Google wants us to be linking youtube, which they own.)

In the first video, the guy cracks open a safe using a screwdriver and a paperclip.

Electronic bypass of a safe lock

Now, what the videos don't show is how much time it took to initially look at the safes and recognize the security flaws in them- but instruction manuals abound on the Internet, potentially reducing the time needed to overcome such flaws. I'm sure this also gets much easier with practice as well.

What really strikes me here is that a lot of consumer products being marketed as being very secure (after all, guns are serious business) are flying under the radar as far as quality goes- meaning that people shooting for less security are just as exposed.

Forced Entry isn't a viable choice either, seeing as how it's about smashing and grabbing.

What is obvious is that working without tools for physical security circumvention is nigh impossible- easily -8 or -9 to skill, with even improvised tools reducing that a great deal (after all, a paperclip is still an improvised tool). DX is vastly more important once you know how to circumvent a device, but IQ is still definitely needed to understand the problem at hand.

Sam: The diplomatic and sociopathic leader of the crew. Sam has been the driving force behind the group's actions since day one, and his feud with Three-Fingers Moran has been a consistent issue for the group.
Red: A 16-17 year old thug whose brother's work in the liftskirt industry got her into organized crime. Red is tenacious, has a fiery temper, and has a lot of maturity issues to work out.
Vinnie: Another thug in the 16-17 year old range, Vinnie is a skulk and thug. Raised on the streets from a young age, Vinnie enjoys gambling, slicing throats and good cigars.
Tony: Tony made sergeant in WWI and made sure that a BAR fell off a truck for his own personal use later. The triggerman of the team, Tony's found himself in the sights of an intrepid bombshell reporter- Rachel.
Isaac: A former cop who has turned into a fixer for various corrupt individuals. Isaac is scary perceptive and would make an ideal serial killer if he were inclined.

Supporting Cast:
Teddy: Sam's brother-in-law and the group's wheelman. Teddy enjoys loud explosions, fast cars, driving fast cars, and causing loud explosions.
Rachel: Possibly the best journalist in the city, Rachel immediately found herself smitten with Tony and is more than happy to dig up information for him. Rachel figures the book she'll be able to write in a decade will be a best seller.
Ben Kincaid: The leader of the Kincaid Outfit, Ben is the boss of the group the players are currently working under. Ben is a smooth operator who would probably be a better fit in an intelligence agency than running a criminal organization.
Senga: Owner of the bar the players use as their base of operations. Legitimate businessman.
Wushu: An asian criminal who specializes in acquiring hard to get items. Cat fancier.

So, the crew has been trying to work on a heist for the last two sessions- get police uniforms and 'raid' a distillery and appropriate their stills for their own purposes.

This has gone swimmingly after Vinnie sneaked into the back of the dry cleaner's that a lot of local police use to get their uniforms cleans.

Vinnie aced his stealth roles. Even the owner's multiple Siamese cats didn't get upset at Vinnie's presence. Vinnie made it out with the uniforms without alerting anyone.

Which is why Vinnie's player was quite confused when the owner, Wushu, sent a ludicrous bill to Sam for the uniforms.

"I aced stealth! How the hell did he learn I was there? You said there was no magic in this campaign!"

Vinnie had dropped a business card for Senga's while he was at Wushu's on account of Wushu's serendipity.

Wushu is an NPC I've been intending to introduce, largely because I need a way to segue a criminal version of Edsel Ford Fong into my game at some point, and the Asian criminal community in NYC during this time period is tiny.

So am I going to let Vinnie avoid the plot purely due to great dice rolls? Of course not! Luck may be great for mechanics manipulation- but Serendipity can allow you to avoid having to roll at all, which might as well just be an automatic success.

Needless to say, a lot of my villains are getting at least a level of serendipity in the future. My players are pulling off the distillery raid next session, which will probably warrant a full action report. No promises.

Posted by Mr. Insidious at 9:04 PM No comments: