My thoughts on the SJG/Bill Webb partnership

One of my politically minded friends (who is an Exalted aficionado and kickass GM) replied to the following tweet: 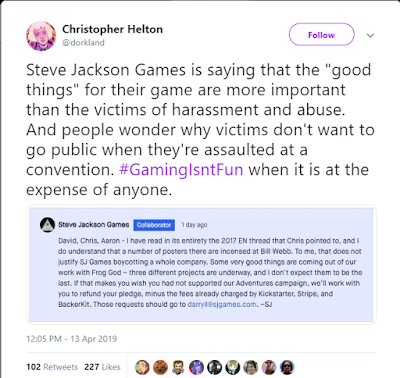 This obviously caught my attention. GURPS is by far my favorite RPG system, I run it, I play it, it has been my go-to for close to a decade now. I very much like a lot of what SJG does.

But stuff like this is troubling. I've been party to some discussions on the matter among my circles, and seen some of the various posts from those involved.

The central talking point was a single incident of harassment that took place in 2017, at PaizoCon. The victim in that circumstance clearly wants to be done on it and move on, a sentiment I heard expressed as a reason to let the matter drop.

It's a very measured response, very carefully tailored to make it clear that Finch took the utmost care to be sensitive of the victim, while also very carefully avoiding implicating Webb or shaking the hornets' nest in any way. It's 'empathy' draped in the careful maneuvering of a lawyer seeking to reduce the exposure their client might present after screwing up. Finch is NOT unbiased/impartial, given that he's a frequent collaborator with and an employee of Webb. The conflict of interest there cannot be ignored.

Webb certainly could have attempted to rehabilitate himself- laying low, giving a genuine apology, demonstrating that he's learned from his mistake and changed how he behaves. Instead, his business partner blandly apologized on his behalf.

The line "Bill does deeply regret his actions, and understands that they were inappropriate and upsetting. " has all the sincerity of a defense attorney spinning things to his client's advantage.

The stoic silence, predicated on "Mr. Webb is also under instruction not to discuss this matter in public, in case peripheral details... might allow the identification of the person..." doesn't excuse that an apology could have been made by Webb. You don't have to discuss details to express remorse, and I suspect Bill only regrets that it blew up in his face in a very public fashion.

So it's one incident of harassment, the victim doesn't want it dredged up, Bill's business partner is convinced of his sincere regret, Bill is keeping his mouth shut, no problem, right?

I find the undercurrent beneath all of this frightening- where are the people saying that Bill's belligerent drunken behavior is being exaggerated, skewed, or is inaccurate? It seems very clear to me that Bill's public behavior is consistently toeing the line of how one should conduct themselves at conventions. I would not be surprised in the least to learn of undocumented/unreported incidents, most of which weren't severe enough on their own to present a problem, but as a pattern are very insidious.

I'm inclined to pay attention to that undercurrent.

Enter SJG and The Fantasy Trip. They're an older company, with a founder who is in his grey years, and let's be honest, they're very much a company that hasn't changed much over the years.

But they really should have seen this backlash coming. Times are changing, and with more mainstream attention zeroing in on Dungeons and Dragons and tabletop gaming in general, the behavior of your business partners isn't really something you get to be ignorant of.

Steve's response is pretty lame, more or less stating that people being mad about harassment is no reason to cut off a business deal. The olive branch of giving refunds is a little muted given that they're still putting people on the hook for fees and whatnot- wouldn't want their customers' moral fiber cutting into the business' financial ledgers, after all.

Phil Reed statements in this thread are the closest anyone has gotten to actually stating that Bill Webb's actions at Paizocon were truly egregious. Given even that, the statement is still too sterile to really paint SJG's response as anything but tone deaf at best.

The Tabletop community is still small, especially once you look at authors churning out RPG content. There's not many people who walk that walk professionally, and that contributes to the formation of an echo chamber. Maybe SJG didn't hear the rumors, the undercurrent, and was blindsided by the accusations, being trapped within the chamber. Maybe the other voices in the chamber are downplaying Webb's actions, and propping up Finch as a reputable source even though Finch's neutrality is disingenuous and deceptive.

That said, I'm not particularly sympathetic that SJG is feeling quite a bit of heat over this. They should have known better than to collaborate with someone who makes the spaces we nerds like to inhabit unsafe for some of the more vulnerable members we share it with. I hope that the wave of refund requests prompts them to rethink their business deals with FGG, and that they will pay more attention to these types of concerns in the future.

I'm certainly going to think hard before putting down money on the next Monster Hunters or Action PDF that tickles my fancy.
Posted by Mr. Insidious at 6:10 PM No comments: